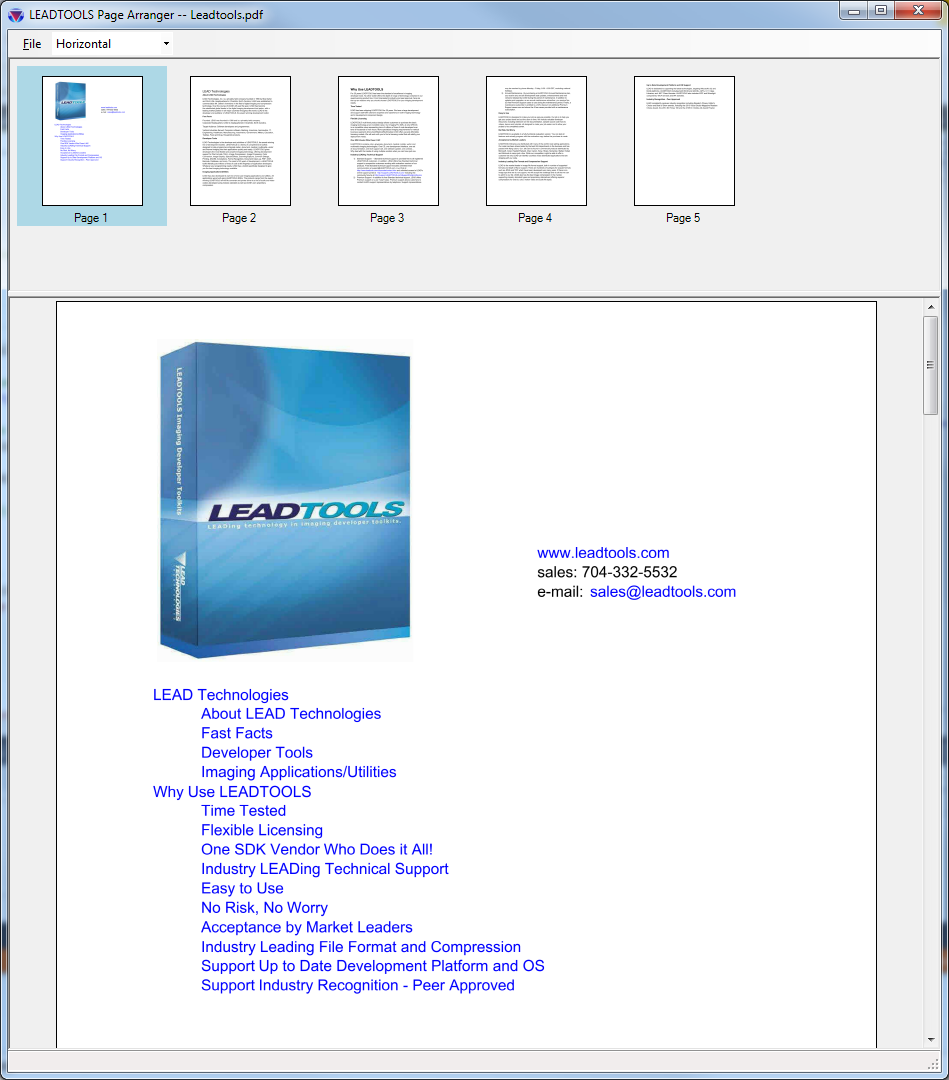 As part of the LEAD Technologies 25th anniversary, we are creating 25 projects in 25 days to celebrate LEAD’s depth of features and ease of use. Today’s project comes from Nick.

First, I created the UI using WinForms for the application. Since the application is basically a document viewer, I sourced the C# Document Viewer demo and used several components within it, primarily the saving and loading routine. At this point, I have a basic document viewer: I can load a PDF and have it displayed as both pages and thumbnails, save the PDF, and exit the program. At this point, saving the PDF really only creates another copy of it since the pages are still in the same order. It’s taken me maybe 90 minutes to get to this point.

For a proof of concept, I modified my code to change the order of the pages programatically, and was able to save out the new page order. Turns out LEADTOOLS already handles this by providing Move() in the DocumentPages property of the Document in the DocumentViewer which uses the LeadCollection object to hold the pages:
Documentation: LeadCollection class

I’m going to do this by polling for various events: particularly, DragStarted and DragCompleted. If no drag occurs — that is, the user clicks a thumbnail and releases the mouse button without moving it — the new InteractiveMode simply behaves as its base class, and selects the item. However, if a drag event occurs, we want the InteractiveMode to handle it as a drag and drop event. This means we don’t need the included SelectItem InteractiveMode. In addition, since lots of clicking and dragging is going to occur, the PanZoom InteractiveMode may cause some conflicts, regardless of the priority order. Since these two are added by default to the thumbnail pane, I’ve decided to clear them out before adding mine, so only mine will have any effect.

I’ve finished writing the code to handle the events now. I’m able to detect when a thumbnail page is selected, and which thumbnail page is under it when the mouse is complete and the drag operation finishes. This took maybe an hour of coding, tweaking, and breakpointing.

I’ve made some aesthetic changes to the InteractiveMode, like changing the mouse cursor when the InteractiveMode is functioning to provide visual feedback to the user. Initially, when performing a drag-and-drop operation, the “Selected Items” rectangle was still drawn, but I’ve suppressed this.

At this point, I can open a PDF in this application, drag-and-drop the pages to change their order in the thumbnail viewer, and save the reordered pages as a new file. After cleaning up, organizing, and commenting my code, I’d say the entire task took just over eight hours. If I weren’t using LEADTOOLS, I’d still be working on getting the document to display.