Birth of the Cloud

Posted on 2012-02-17 by Otis
As with any software development company, LEAD has several test machines in various departments which we use to run lengthy stability tests, set up specific operating systems or environments, and pretty much anything else you wouldn’t want to use your development machine for. A while back, we made some significant changes to our multimedia toolkit including several new formats, codec optimizations, and improved streaming support. During the development and testing process, our multimedia team commandeered every available test machine in the support and QA departments for running their lengthy transcoding tests.

As if it wasn’t enough that every test machine in my department was locked up, they started testing on our personal work machines as well. There were many times my work would be interrupted with “Hey, can you convert this file for me? Just let it run in the background while you work.” Despite my reluctance, they were right! Other than the couple of minutes to set up their test and report the results upon completion, it didn’t affect my work in any way. 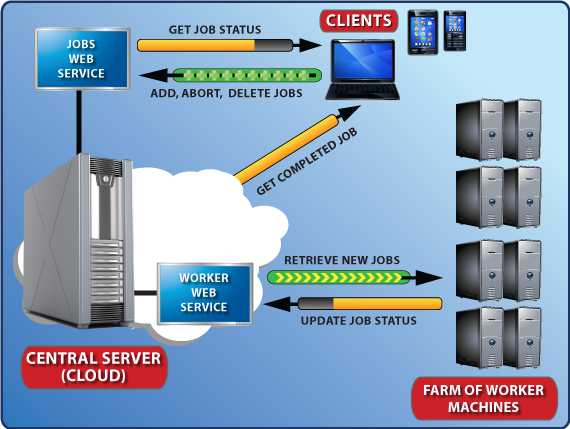 
After the multimedia team had bothered enough people around the office about using their machine, we all came together and started tossing ideas around. What if the multimedia team could use my machine for their testing, but not bother me in the process? What if I let them borrow 50% of my CPU for their test and use it however they want? Instead of having to physically be at my machine to set up the test, what if they could simply add their tasks to some server that delegates them to different machines on the network? What if that server divided the tasks based on the current load of each machine, how many tasks it was working on, and several other factors?

Thus the LEADTOOLS Cloud SDK was born. This SDK would be the basis for a distributed computing framework that would not only make everyone’s life around LEAD a bit easier, but would create a stellar product for our customers!